skip to main | skip to sidebar

Date Set for 'Ride For Health 3'

It is our pleasure to announce that the date for 'Ride For Health 3' has been set. The Kittiwake Snowmobile Association will be hosting the third annual charity snowmobile ride on Saturday, February 13, 2010! For those asute readers of this blog, you'll quickly notice that's very close to Valentine's Day so we'll be incorporating a sweetheart theme into this year's ride.

Again, 100% of the proceeds will go to benefit the health care system in the Kittiwake Coast area. In the last 2 years, our ride has raised nearly $30,000 for Brookfield Bonnews Health Centre!

Keep checking back for more details. 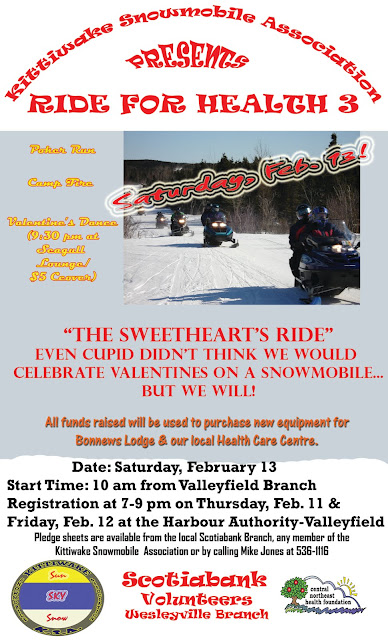 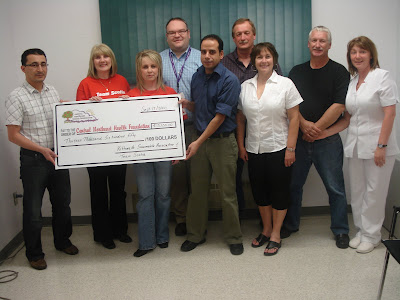 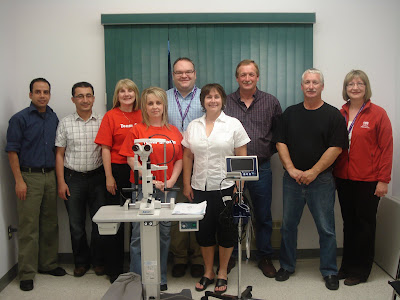 Welcome to a new season! As October comes to an end we snowmobilers automatically begin to think about the upcoming snow season, and if you're like me, you're thinking about it year round! We all know about the bust that was last year's snow season, but despite the painful absence of snow there were some bright spots. The second annual 'Ride For Health' hosted by the K.S.A. raised $14,000 for medical equipment at Brookfield Bonnews Health Centre, congratulations and thank-you to all that helped out and contributed, especially the volunteers of Scotiabank!

Thank you for supporting our club and have a great and safe snowmobiling season!

In order to better serve you, the people who pay to ride the trails of the Kittiwake Snowmobile Association, we are continuosly looking for ways to get information to you as soon as possible. This website is one of those means, on it you can find out about future events as well as learn about current trail conditions on our many kilometres of trail.

To this end we are attempting to assemble a email listing of current club members and those who support us by buying trail passes. When we receive pertinent information that affects you, this list will be used to provide instant updates directly to your Inbox. We will attempt to provide you with the most recent trail conditions as reported by the groomer operators including snow conditions and trouble areas to keep an eye out for. We will also use this listing to provide you with information on upcoming events and activities relevant to local snowmobile users.

If you wish to join this email list please forward your email address to kittiwakesnowmobile@gmail.com and in the subject area type Join. You may quit this service at anytime by simply emailing the same address and type Quit in the subject area.

Executive
Kittiwake Snowmobile Association
Posted by KSA at 8:33 AM No comments:

Winter 2008: A Successful Year for the KSA

Winter 2008 seems like ancient history right now but it was one to remember! The snow came early and kept coming right up into April and we all put many miles on our machines. Winter 2008 was an excellent year and one which we will remember for a long time. We wish to thank everyone who supported our club by purchasing trail stickers and to all those who helped drive and maintain the groomer as well as help keep our trail in good shape. A special thank you to all who helped with the First Annual "Ride For Health". Our charity snowmobile run, in partnership with Scotiabank helped raise over $15,000 for emergency equipment at Brookfield Bonnews Health Centre. Our event was recognized as one of the premiere snowmobile events of the year for the province and people from across our fair land are longing for our 2009 event.

Thanks for a wonderful year and see you all on the trails in 2009 (hopefully a little earlier!!).

Executive
Kittiwake Snowmobile Association
Posted by KSA at 10:21 AM No comments: 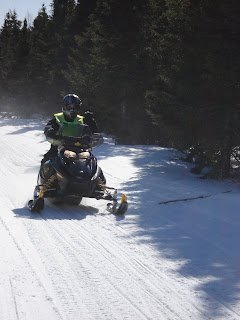 Welcome to our 'new' snowmobile blog. It is a work in progress and we will be upgrading it as the season approaches. We will use the site to promote everything which is snowmobile worthy in the Bonavista North region of Newfoundland and Labrador. We will be providing trail users with maps of our various groomed trails, weather forecasts as well as current snow conditions and trail grooming schedules.We will be encouraging local business owners to take advantage of the site by offering them the opportunity to promote their 'snow' businesses to both local users and visitors alike by providing them with an ability to promote and advertise their services to users. We believe we have a 'first-class' groomed trail product that locals are proud of, we also believe it's time to see this tourism product create real economic benefit to the region. Let's take advantage of it!So keep coming back, write us with your comments, make suggestions on specific new items you think this site should have, bundle up and remember to ride safe!
Posted by KSA at 4:32 AM No comments: 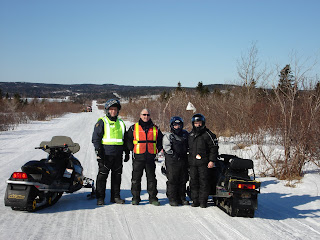 It's Official, the first "RIDE FOR HEALTH" was a huge success!!

It’s early on a Saturday Morning, a time when many people are still waking up or sipping on an early morning coffee, but not this day and not in New-Wes-Valley. All around town one can hear the loud rumble of two-stroke snowmobile engines or the quieter whine of a newer four-stroke. People are up and about, loading machines on their trailers or off pouring gas and lube into their winter mounts because this morning is March 1st and this is the beginning of the first “Ride for Health”.

The “Ride for Health” is a charity snowmobile ride hosted by the Kittiwake Snowmobile Association (K.S.A.), the local Scotiabank branch, the Bonavista North Ladies Tourism and Recreation Corp. (BNL) and Central Health (Brookfield Bonnews Health Center). This snowmobile run isn’t an ordinary, run of the mill winter ride, it’s a fundraiser aimed at raising money to help purchase new emergency equipment for the local hospital which services the communities from Hare Bay to Carmanville. 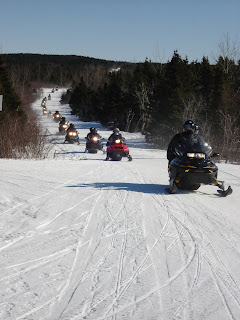 Rick Kean, Co-Chair of the Kittiwake Snowmobile Association stated, “Our Association members are passionate about snowmobiling, we might sometimes disagree about the best manufacturer of snowmobiles but we never disagree on the best form of precipitation…snow! When we first looked at hosting a community event linking our favorite activity with raising funds for our local hospital, the response was immediate and overwhelming in its support for the initiative. The decision to partner with Brookfield Bonnews Health Center and Scotiabank on the Ride For Health really was a easy one for our membership. We are truly proud to be part of this worthwhile event and in doing our part to help raise funds for our local facility.”

The event included a snowmobile poker run that covered approximately 100km of groomed trail riding, a scavenger hunt for children, a fishing derby, camp fire, dozens of prize draws and a hot lunch provided by the BNL. It was capped off by a dance at the Seagull Lounge with complimentary bus service donated by the Nova Consolidated School Board.

The ride began at a little after 10:00 a.m. with the roar of 75 snowmobile coming to life at one time, one of the younger riders looked at her mother and exclaimed, “Mommy it sounds like thunder but it just keeps going on, it’s pretty cool!”

As the 75 snowmobiles and approximately 125 riders tracked through the pristine Bonavista North landscape many riders likened the long stream of machines to a serpent sliding over the earth’s surface, a little eerie at first but inspiring at the same time. Tracey Kean, the Primary Health Care Manager at Brookfield Bonnews Health Care Center exclaimed, “I’m glad to be part of this event representing Central Health, I’m excited to see so many members of our community come together in a fundraiser for our facility.” 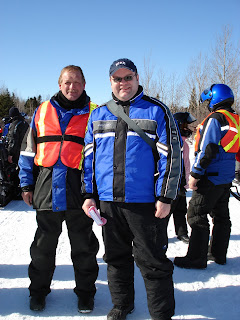 This was very much a community event, in fact it represented groups and individuals from several communities in Bonavista North, Lori Jones, a Scotiabank employee in Wesleyville stated, “I was born in Centreville but now live in New-Wes-Valley, it’s gratifying to see so many faces from both communities come together for this one event, I think it bodes well for the future of this region.”

The event truly was a full team effort that included dozens of community residents, several non-profit community based groups like the Kittiwake Snowmobile Association, dozens of corporate donors/sponsors, the staff and management of the Scotiabank branch in New-Wes-Valley, the RCMP detachment in Wesleyville with Const. Scott Hynes and two members of the Glovertown detachment, and the Nova Consolidated School Board. In fact, a special note of thanks should be given to the Manager of the local Scotiabank Branch, Mr. Wayne Bruce who initiated Scotiabank’s dollar-for-dollar contribution to this worthwhile event.

Also in attendance for the day’s events was Mr. Scott Simms, Member of Parliament for Bonavista - Gander – Grand Falls Windsor, “I don’t get to ride very often but when I do I enjoy it to the fullest, when it’s for such a great cause, well it’s even that more special. The fact that the event was put together in less than three weeks is pretty amazing, the fact that they raised over $15,000 was outright astonishing! This took a lot of work by many volunteers, I think Mike and all of the volunteers should be very proud of what they accomplished today, I hope they continue with this event next year. I, for one will be back again.” 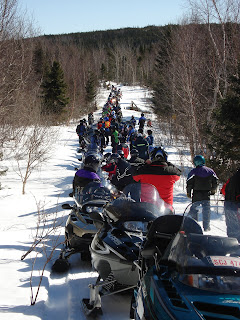 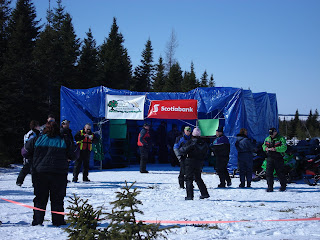 Who stole our snow!! It is anticipated that off-season trail work will be taking place throughout the fall of 2009, keep an eye out for workers and equipment.

Christmas 2009 is Coming, What are You Asking Santa For?

Send Us Your Favourite Snowmobile Pictures 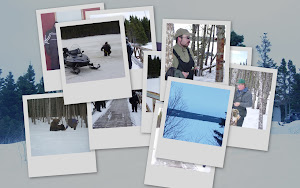 Trail Stickers for the 2010 season are now available at select vendors or online at the NLSF's website. Early Bird Passes are available on or before December 1st, Family Packages are also available.

If you have any questions or concerns, please feel free to contact us at kittiwakesnowmobile@gmail.com

Where to Find Us 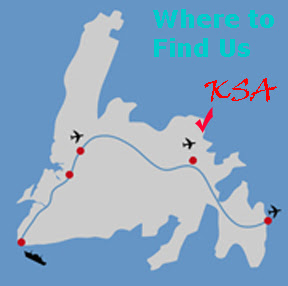 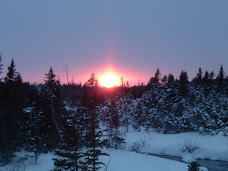